Since 2013, Gamping has been connecting thousands of property owners with campers, looking for somewhere to pitch their tents. The Airbnb of camping is now making its way across Europe.

One summer's evening, Joseph Leopold returned from his holiday to find himself stuck outside his house without his keys. There was no-one home and it’s not like Joseph to smash a glass door. Instead, the holiday maker decided to pitch his tent between the vegetable garden and the patio.
" To my great surprise, I had an enjoyable night. I had tomatoes from the garden, I could connect to the house Wi-Fi, I was on private land, and I was allowed to be there! " Joseph has always camped in the wilderness during his holidays. The problem is that in his home country of France, as in plenty of other foreign countries, this type of travel is not really accepted and often forbidden. " Each time, we would find ourselves in places with no official camping zone, so we would just sleep wherever. We were used to being woken up every morning by the police " It was during my night camping in the garden that I came up with the idea for Gamping, a website which advertises thousands of private spaces which owners have agreed to rent to campers for a few days.

After completing a masters in entrepreneurship in 2013, Joseph registered the gamping.fr domain name, chose an OVH web hosting package and quickly developed the first draft of his website. He then contacted the first hosts over the phone and in a few weeks he was able to offer about 40 locations across France. By chance, a journalist from the French daily newspaper "Le Parisien" contacted him, interviewed him and published a full-page spread in the paper’s national edition the following day. During that same summer, Gamping featured on Europe 1, a leading French radio network, and on two big French TV channels: France 2 and M6. In the following weeks, the website was flooded with visitors and this took its toll. Designed very quickly, and based on WordPress, the website had trouble dealing with the increasing volume of traffic.

In December, Gamping welcomed its co-founder, Louis-Xavier Signal, from Netvibes. He is also a keen traveller, but above all an outstanding developer. Together, Joseph and Louis-Xavier managed to build the second and current version of Gamping which is more fluid and clear. However " the increase in traffic on Gamping.fr made optimising the site a real priority, and we managed to do this quite quickly. " Since then the website has worked perfectly, even in the summer time.

In recent years, the website which matches campers to owners has witnessed impressive growth, partly due to the constant media attention, but mainly because of the flawless service. Counting over 25,000 members, Gamping has already taken several thousands of reservations in 2016. A new partner has also just joined the company to assist with expansion to new countries, including Spain and Italy. "The idea is not so much to offer locations all over Europe and the world, but to attract customers from English speaking countries, to France. This is why we quickly translated our entire website into English, to avoid missing out on this growing market " explains Joseph. 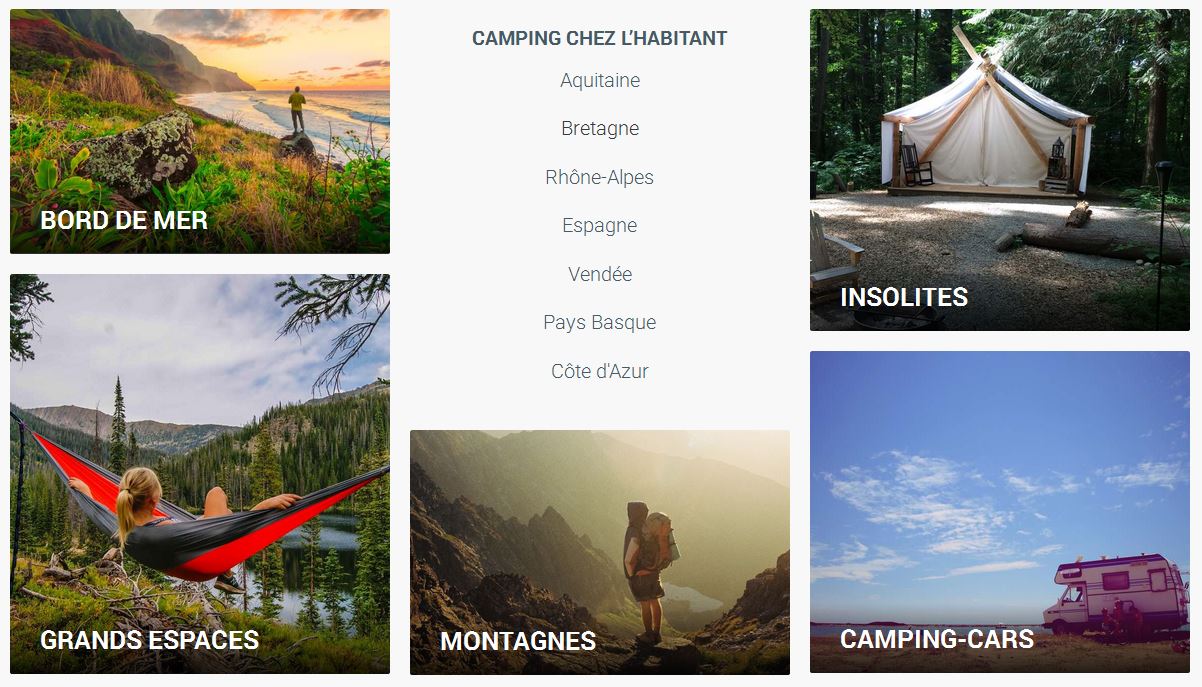 Gamping and camping: two concepts at odds with each other?

Surprisingly, Gamping has not overshadowed traditional camping. After several months running the business, the Gamping team realised that they were mainly targeting a new type of clientele, which the traditional camping industry had not yet focused on. " In fact, we tend to deal with young couples who used to go off camping together in the wilderness with a backpack. The years have passed, these couples have had children and leaving on the spur of the moment has become more difficult" explains Joseph. Gamping offers a safe environment and hikers and other travellers know where they will spend the night, before they set off. The startup's website also contains additional details about the surroundings of the venues provided: Wi-Fi, toilets and kitchen facilities are usually available to campers. In short, all the benefits of camping are now accessible in locations which were not necessarily designed for the activity.

Owners who rent out part of their garden may well be tempted to cross the line and transform what was a secondary occupation into a proper camping business. The startup has found the solution: "our terms and conditions do not allow rental for more than three consecutive or discontinuous months over one year, and we spend a lot of time moderating the different ads, to remove those from professional campsites for example. Moreover, all users are asked to rate their hosts. This means we are easily able to detect owners who are trying to take advantage of Gamping by pushing offers which they shouldn't." This rather strict policy, and the fact that their prices are well below the £18 per night charged by the average French campsite, has ensured the startups’s success. Over this summer Gamping has continued to make impressive progress, not only throughout the gardens and meadows of France, but also in the global media, which is now paying them close attention.

Today Gamping uses a SoYouStart dedicated server with optimised RAM and CPU as well as two other micro-instance servers for sandbox environments and continuous integration. SyS also offers Gamping the best price/performance ratio to perfectly meet its needs. In the summer season, the website gets between 3,000 and 4,000 unique daily visits. Traffic spikes are aligned with media coverage which can generate up to 20,000 visits an hour, or several thousands of concurrent visits.

Gamping has (practically) never crashed during media coverage. Without intervention from the tech team, the server can handle up to 1,000 simultaneous visits, which is roughly the volume of traffic triggered by a slot on a morning TV show, regional news or TV BFM (a 24-hour rolling news channel). However, if Gamping manages to get a spot on “Capital” (a big French TV show), it moves its gamping.fr domain to its CDN which then handles the entire load for the purely static part of the website. This gives the startup peace of mind that its homepage will remain accessible. The dynamic pages of the website are served by a temporary domain pointing towards the SoYouStart server. After a few hours, the team returns the DNS configuration back to normal, while waiting for their next prime time slot.

Today Gamping is looking to improve its ability to deal with its ever increasing traffic spikes. To this end they are exploiting a cache server which is able to serve all static content as well as a specific “TV” mode which can be activated at any time. This mode enables additional data caches for the most popular searches, and disables some advanced features, including search filters. It can even stop users’ logs being saved. So far, Gamping’s strategy is paying off.

The connected cube that brings happiness

Yousign: Putting a Stop to the Outdated Hand-Written Signature